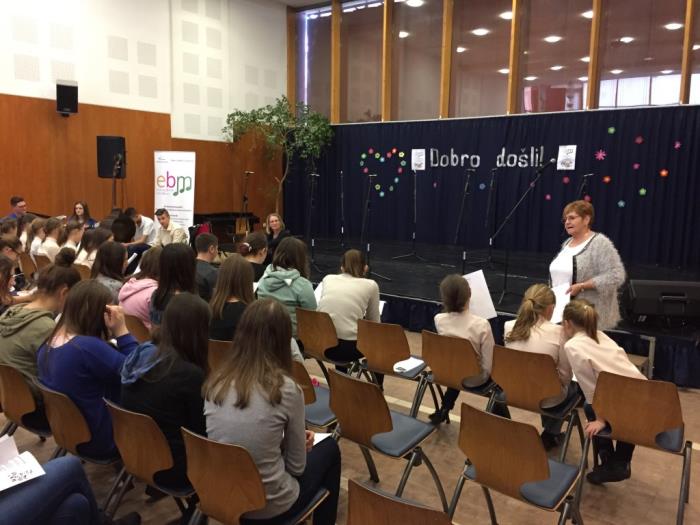 On January 17th, 2018. the following activity Joint workshop of choir and solo singing was held in the premises of Kindergarten, Elementary school, High School and Student Hostel "Miroslav Krleža" in Pécs, as part of implementation project E.B.M. The activity participated a large number of participants, over 120 of them. Except the hosts of workshop, the program was attended by participants from the Primary School Vladimir Nazor Virovitica from Virovitica same as the participants from Music School of Jan Vlašimsky Virovitica with their accompanying professors.

All participants were welcomed to a set table where everyone could consume refreshment after that an official program started. As the activity takes place on stage, the hosts presented a special program, where they first were sang the Croatian songs. Following the greeting of Headmaster Mr.Gyorvari, the solo songs and choir performed song on Hungarian language and Croatian part of song, were sang by female singing choir of Augusta Šenoa from Pécs, whose members met with their mature voices the atmosphere of church singing. Students from the German school center Valerija Koch from Pécs sang several songs in German. After that, the student Ms.Kata Egri accompanied by the tamburitza composition of the Croatian School of Miroslav Krleža sang in the roman language, which was particularly delighted by the audience. At the end of the introductory program, music teacher Ms.Marta Šandorka Rohonczi managed to persuade and to sing aloud with all the participants of the program who sang the anthem of European Union in Hungarian, Croatian and German. After a brief pause, three mixed groups of participants, who had been in rotation of three more than a half hour workshops, were trained to sing a single Hungarian folk song, treated as fun, and it was interesting that the text was partially replaced by the Croatian translation of the original. In the third group, a German folk song was performed, where besides harmonics were soon involved the drummers of the beneficiary 1 Miroslav Krleža from Pécs.

The final part of the activity was a brief presentation, where all the students shared the lessons learned earlier, which, with the help of the new sound technique proclaimed as part of the project, sounded in a way that all listeners who were present in the school building cowered. At the end, the Head of Institution shared special gifts, especially engraved USB sticks, through which were pulled paper planes with a project logo on their wings, which led by the principal's words, simultaneously were launched to air of the grand ceremonial hall.

After the end of workshop all participants had lunch in the in the festive ballroom near the Hotel. After lunch, the surprise was not over yet, as the participants from Virovitica and their companions had the opportunity to visit one of the most representative buildings in the city of Pécs, the Concert Hall Zoltan Kodaly. The monumental building of 11,144 square feet and 999 seats at the auditorium is a concert hall of enviable dimensions and one of the most beautiful in this part, and wider in Europe. In addition to the tour, the children had the opportunity to try the world-famous acoustics of the hall where they sang two songs from their choir repertoire.

In the late afternoon hours participants went back to theirs homes.